Dialogue in a Land of Monologue? 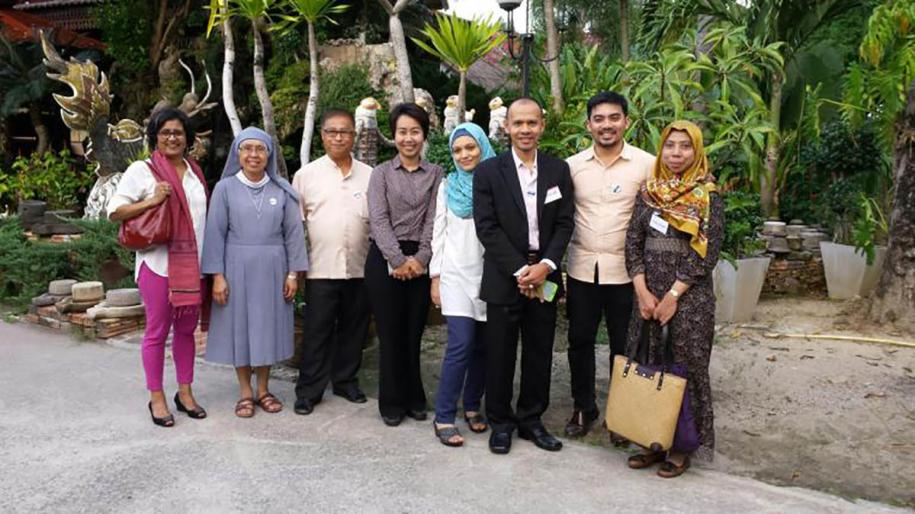 On my recent trip to southern Thailand, I was surprised by how many “Free Gaza and Palestine!” shirts I saw worn by Civil Society Organization (CSO) leaders. I had heard concerns for Palestinians fairly frequently in my other international work, but didn’t expect that that this issue would have such visibility in Southeast Asia. My two colleagues (from Mediators Beyond Borders) and I were there to deliver a workshop on “Interfaith Dialogue and Complex Resolution” to professors and CSO leaders at Walailak University. We spent our first few days meeting with journalists, academics, students and activists to better understand the cultural context within which we would be working and what current issues informed the conflict in Southern Thailand.

I asked two of the young men wearing the “Free Gaza and Palestine” T-shirts about their interest in the Palestinians’ cause. They explained that the shirts were an oblique reference to the conflict in Pattani, a region of southern Thailand with deep historical, cultural and political roots. The insurgency, which has intensified since 2001, has resulted in thousands of deaths at the hands of security forces and insurgents. Because of the restrictions on free speech and free assembly, as well as the antipathy that many Thai people exhibit toward Malay Muslims, it’s not safe to openly advocate for independence or autonomy for Pattani. “So we wear these shirts, because we could never be seen in public wearing shirts saying “Free Pattani,” for fear of repercussion, they explained. The shirt serves as a stand-in for their own concerns and is widely recognized as such in southern Thailand.

I learned that many supporters see themselves as endangered by open advocacy of their political views, noting that gatherings of more than four people are likely to be tracked and observed by security forces. One journalist with whom we spoke mentioned that he had been temporarily jailed for having used one of the four “taboo” words: autonomy, sovereignty, independence and BRN (the name of a separatist group). Another characterized their situation as “we are Thai, but the Thai people do not consider us as Thai.” They spoke of being watched by the government, “visited” at home by the military, and/or having their DNA taken to be entered into a national registry.

Several workshop participants, including Muslims, Buddhists and Catholics, spoke about having had best friends of other religions as youth, and how they have since grown apart, a theme I’ve heard reiterated in other countries experiencing religious violence. They lamented that such friendships are no longer possible, and also spoke of widespread anti-Malay/Muslim discrimination with respect to education and jobs. “If you wear a hijab, you won’t get a job,” said one participant who explained that he has a “Thai name” in addition to his Muslim name, to increase his opportunities for employment. When referring to the on and off peace negotiations between government and insurgents, they named the differing concerns of each party: “the government wants the shooting and violence stopped; we care about the history, discrimination and repression.”

Their powerful stories stimulated my thinking about possibilities for dialogue under such conditions. In the United States, we treasure our rights of free speech and free. Voicing our dissatisfactions with the government and protesting to express our concerns have a long and rich history. Many of the Thai people with whom I spoke had a very different experience with dissent, which they described in terms of discrimination, repression and persecution. As we contemplate next steps under such circumstances, it will be essential to practice a “do no harm” approach. Our practice of “mapping the situation” and extensive preparation can help to clarify who might be interested in participating in dialogues, under what conditions and how we might proceed in ways that do not literally jeopardize the safety and security of participants. Further conversations can also help us to better understand whether dialogue is likely to be effective and/or helpful, given the current political realities. It may be that any such work would need to focus initially on intra-group conversations to build support and resilience for subsequent inter-group work.

As a dialogue practitioner, I am asked about how to deal with differences in power between the groups. In this situation, where widespread discrimination and power differences between ethnic Thai and ethnic Malay Muslims have so many ramifications in daily life, we would need to be particularly sensitive to potential participants concerns about how to create a safe enough space for dialogue.

I still believe that dialogue can have enormous benefit in promoting community by building relationships and trust. At the same time, we are challenged to reflect on how the fundamental lack of safety and security will impact future plans. Together we offer our interfaith prayers and hopes that our work will bear fruit and that the Thai people will find more constructive and peaceful ways to engage around their differences.